A busy street in Hanoi

If I could use only one word to describe Hanoi, chaos would be it. I can picture those who know me laughing at the irony of me, one of the most order loving people, being here. I mean… I’m a data analyst for pete’s sake!

The painted lines that run down the center of roads are merely suggestions of where lanes should be. As I look down from the safety of my balcony I can see that almost nobody pays any attention to them. It is common to see cars going on the wrong side of the street honking the whole time.

Speaking of honking. As much as I can tell, he who honks first is not at fault. For this very reason, people are quick to honk or even ride the horn. Intersections are another place where horns are used. I believe it is because the lack of traffic signals necessitates letting oncoming traffic know that you are about to blast on through an intersection.

Imagine this… you are trying to cross a very busy street (think Hilltop and Cypress at 5 o’clock). There are no signals. Cars just go when they feel like it. You need to get from Jack in the Box to Del Taco. How do you get across? If you are like me, you “Frogger” your way to Black Bear Diner then on to Del Taco. How do the locals of Hanoi do it? They walk with purpose, often taking the direct A to B route, never looking anywhere but straight ahead. Talk about courage!

Scooters are by far the most common form of transportation. I ride a scooter at home. I have even found myself holding 3 takeout boxes and a 40 ounce soda between my feet as I drove back to work after lunch. I thought I was pretty cool. I have been humbled. Here I have seen people ride with 3 on a scooters… they ride with cages full of chickens on scooters… ladders… huge bags of rice stacked higher than the driver… and I have been told, water buffalo. I promise if I see a scooter with a water buffalo I will take a picture, until then I will dismiss that one as someone trying to figure out how gullible the tourist is. 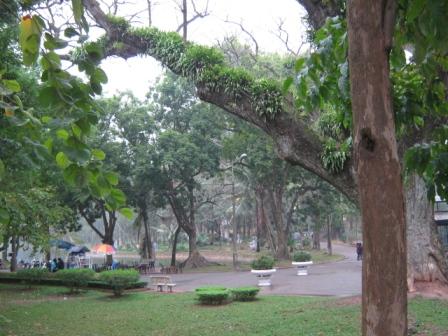 So, with all this chaos, be proud of me that I spent 4 hours walking around Hanoi with my Dad. We walked by the Botanical Gardens, the Ho Chi Minh Mausoleum, schools, hundreds of restaurants, dozens of government buildings (which we found you are not supposed to take pictures near), statues, water fountains, street venders, and places that offer Pho To Co Py. Dad thought we could buy noodles at these places since Pho means noodles. No, this is where we could have our passports copied.

We also went to the military museum, but I think my Dad could describe this much better than I could so I will leave it to him.

As for me, I am back in the hotel room getting ready to tackle my homework and glad to be out of the chaos. I am happy to stay in my hotel for what remains of the day. As for my Dad, he is back in it, exploring another part of the city.

We both got up early this morning, and enjoyed a fine buffet breakfast in the hotel. They make their coffee strong, just the way I like it, and the bread choices were excellent. I remember “French bread” from the last time I was in Vietnam, and I tried a few other varieties of muffins and pastries. Laura went for a slice of something she described as what a twinkie would be if it was freshly made, a light cake with fresh whipped cream.

I saw the same traffic as Laura, but saw calm as much as chaos. The thing that impressed me was the relatively sedate pace. They kept moving with a purpose, but there were no angry gestures or verbal comments of any kind, no speeding away from a congested spot. Even the horns were handled with tact, more friendly beep (hey, I’m here, you know), than get-out-of-my-way, I’ve-got-somewhere-I-need-to-be. Laura mentioned this morning that you don’t see any vehicles with body damage either.

She was a good sport and we went through the military museum. I was prepared to be impressed by a bicycle that was used to carry 700 pound loads of materials to the south, but have to wonder how someone could manage that. Their path wasn’t a paved road on level terrain after all. It was a single speed, steel framed bike that was reinforced with bamboo, and still looked kind of fragile. Ok, someone else would be impressed with the Russian and American jets, but that bike impressed me, and the guy who rode it, even more.

This entry was posted in Uncategorized. Bookmark the permalink.

5 Responses to Chaos and Calm